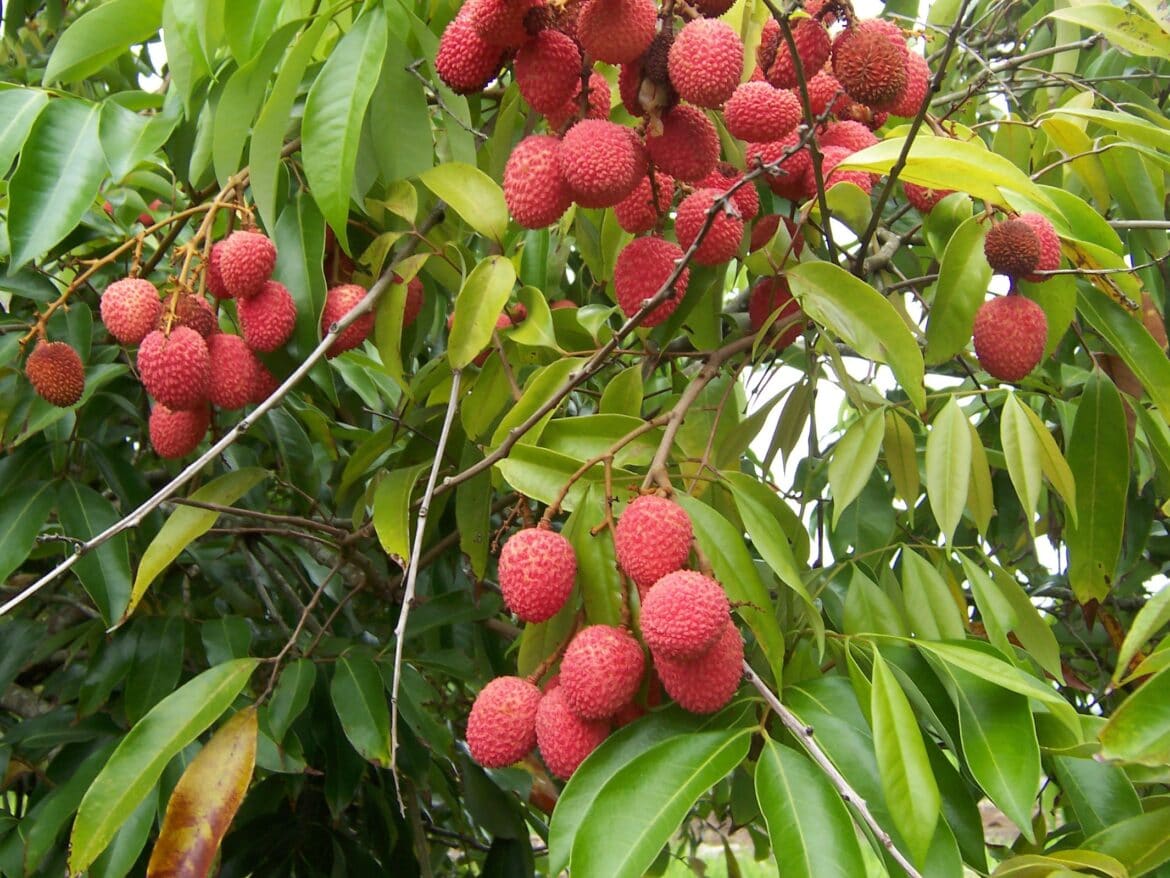 Everyone will eat Litchi fruit. It is very sweet and tasty. Whether children or adults, everyone likes to eat litchi. Litchi is one such fruit which is called Rasgulla growing on the tree. During the summer, people get relief from the heat due to its sweetness and juiciness. Below we will explain in detail the benefits of litchi –

The litchi fruit tree is medium sized. Its fruits are round and raw in green color. They become velvety-red in color. The pulp inside the fruit is white in color, fleshy and sweet. There is a brown seed inside each fruit.

In Ayurveda, litchi is known not only for its sweet taste, but also for its many medicinal properties. Litchi is a fruit of warm nature, which reduces pain, gout and gall bladder of arthritis .

The botanical name of Litchi is Litchi chinensis (Gaertn.) Sonner. (Litchi chinensis) is Syn-Nephelium litchi Cambess. The total of Lychee is Sapindaceae. It is also known by these names at home or abroad: –

Litchi contains vitamin C, potassium. It cools the body and stomach. Take a look at these same properties of litchi and 9 major benefits of health resulting from it …

Every season brings with it a lot of fruits and vegetables. They have their own importance and qualities. Similarly, the hot weather brings with it many such fruits which contain plenty of water and fiber… one of them is litchi. It is the sweetest pearl of summer treasure. Not only do you get taste and flavor in litchi, you also get a treasure of health. Lichi is a summer fruit. Most fruits that come in summer have a good amount of water. Similarly, litchi also contains plenty of water. Litchi contains vitamin C, potassium. It cools the body and stomach.

1. Litchi is very good for your immunity.

Litchi is very good for your immunity. By eating this, you can boost your body’s immunity power. Litchi is rich in beta carotene, niacin, riboflavin and folate. All these things are helpful in improving the immune system of the body.

Eating litchi also improves the digestive system, as it is a source of fiber. Litchi is also helpful in problems like diarrhea, vomiting, upset stomach, stomach ulcers and internal bloating.

If you have a sore throat or pain, eat 1 litchi and then see the magic of this fruit. Actually, litchi is also very beneficial in reducing sore throat.

Those who like litchi can also understand this without telling them that litchi is such a thing which is full of water. It fulfills the lack of water in the body. Litchi also works to cool the body.

Litchi contains a lot of potassium and sodium.

Litchi contains a lot of potassium and sodium. This is the reason that eating litchi keeps blood circulation in the veins right and due to this, blood pressure is also controlled.

6. The benefits of litchi in getting good skin

Litchi can give new glow to your skin. It contains a lot of vitamin C which acts like antioxidant fighting. It does not cause pimples or pimples on your skin.

By eating litchi, hunger is kept under control, which keeps the stomach full throughout the day.

7. Litchi is helpful in weight control

Those who are alert for their health should also take full care of this so that their weight remains in control. Litchi contains plenty of fiber, which is helpful in weight control. Eating litchi in the morning keeps the appetite under control, which keeps the stomach full throughout the day.

8. Advantages of litchi in cancer prevention

Many researchers have proved that litchi has properties to fight cancer cells. Consuming litchi daily does not increase cancer sales.

Litchi is helpful in preventing osteoporosis of bone disease.

9. Benefits of litchi in strengthening bone

Litchi contains calcium, phosphorus and magnesium, which play an important role in physical development and are very good for bones. Litchi bone disease is helpful in preventing osteoporosis.

10. Benefits of Litchi for Neurological Disorder –

Due to this disease, the patient does not have control over his organs. Body parts, such as hands, feet, face, etc., start to move without any reason. You can also take advantage of the property of litchi in many other diseases. Litchi seeds can be used to treat nervous system disorders. It’s profitable.

Due to today’s sluggish lifestyle, the number of diabetic patients is increasing day by day. Stress, decreased sleep, high intake of junk food, or eating too much sugar also increase the chances of diabetes. The use of litchi helps in the control of diabetes.

12. Litchi to Get Relieve from Small Pox

This disease is called small pox in English. In this disease, grains like lentils come out on the body. These grains take the form of pimples. There is also a lot of pain in these pimples, and they also cause fever. The raw fruit of Litchi is used in the treatment of chicken pox.

13. Benefit of Litchi for Hair Loss

Litchi has the property of retaining the moisture of the skin, which helps in reducing head acidity and at the same time reduces the dryness of the hair and prevents them from becoming lifeless and fall.

Most of the problems in the eyes are due to the increase of Pitta dosha, such as irritation in the eyes. Litchi has Pitta properties because it provides relief in eye problems.

Litchi also protects you from troubles like viral infections of colds, as it has immunity which helps your body to fight against diseases.